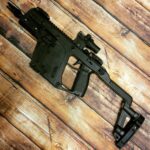 ++New Parts Being Made++

The weight of the Vector tiring you out?  Do you desire to shoot the vector single handed? Well look no further! Yeti Wurks is proud to present you with its very own Kriss Vector Tail hook adapter!! Just remove the “stock” portion from the folding assembly and install the adapter! Viola! You know have a braced Vector! The best part is that the brace even allow you to use the stock catch when the assembly is folded! Compatible with both the original and redesigned OEM folding stock.

The YW Vector Tailhook adapter is made out of black anodized 6061 aluminum for long life and durability. Length of pull (from trigger face to back of assembly) with the adapter and Tailhook installed is adjustable between 12.5″ and 13.5″. Due to the general design LOP could be adjusted longer, but it is not recommended as and LOP longer than 13.5″ could make it considered a stock and not a brace.

THIS IS ONLY THE ADAPTER! A FOLDING ASSEMBLY AND TAILHOOK ADAPTER IS STILL NEEDED.

The lower tang of the folding assembly can be retained without preventing operation of the brace, but it is recommended that it is removed to prevent any confusion as to your intent with installing the brace.

Remember that the brace can be installed and occasionally shouldered without  changing your pistol into an SBR, but if you intend to use the brace as a stock you could be breaking NFA laws without a tax stamp.

Note: the adapter shown in the product pictures is a prototype. Actual adapters with CNC’d from 6061 aluminum and black anodized. Vector, folding assembly, and tailhook brace shown but not included!

There are no reviews yet.