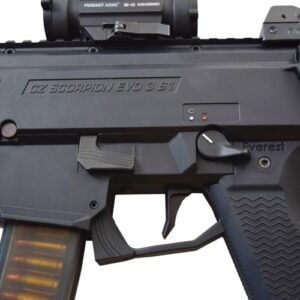 The CZ Scorpion EVO III is a great pistol caliber carbine/pistol. However there’s a few improvements most shooters see the need for after shooting it for the first time. Mainly the trigger, at 10lbs of pull weight or higher it’s a bit to overcome for even the most experienced of shooter. However, Shooters Element has developed a solution for the problem with its enhanced flat trigger.

With the improved ergonomics and add leverage of the trigger they are seeing anywhere from a 7 to 10 % reduction in pull weight with just the trigger, they are also noticing an improvement in the second most common issue on the gun, the strong side safety digging into a shooters hand. Because of the design, shooters will find it more natural to place the pad of their finger (between the first knuckle and tip) on the trigger for a more steady pull and constant pull allowing your trigger finger to curve out and away from the safety rather than ride along it.

Because the trigger is also on the ATF list of 922R list you can bet this counts as a USA made part to you overall number of compliance parts needed for the scorpion if you are going the SBR route.

While we suggest that the trigger be installed by a professional gunsmith, for most DIY and mechanically inclined people out there swapping the trigger out should be fairly simple and straight forward.

What’s in the package:

There are no reviews yet.